Switzerland already has double taxation agreements with over 100 countries (DTA). It has now also concluded agreements with two important trade and industrial partners: with Bahrain and Saudi Arabia. The provisions will apply from 1 January 2022.

OECD Model Agreement and BEPS-Project as Guideline
The agreements with Bahrain and Saudi Arabia largely follow the model agreement of the OECD. In addition, they adopt important provisions of the OECD and the G20 projects to combat the reducing and shifting of profits. For example, both DTAs contain an abuse clause, which corresponds to the “Principal Purpose Test Rule”.

No Arbitration Clause
Furthermore, the DTAs with Bahrain and Saudi Arabia contain an administrative assistance clause in accordance with the current international standard for the exchange of information on request. Both agreements have laid down a mutual agreement procedure, but only the Bahrain DTA contains an arbitration clause. If, in the case of dispute, Bahrain and Saudi Arabia are unable to find a mutually satisfactory solution, then, in principle, double taxation remains in place.

DTA Bahrain
Bahrain, with its diversified economy, is an important partner for Switzerland in the import/export sector. In April 2015 both countries began negotiations towards concluding a DTA. A first draft was completed in 2016. In Bahrain, the approval process was protracted, causing a corresponding delay in its ratification by Switzerland.

DTA Saudi Arabia
Switzerland has long negotiated with Saudi Arabia over an agreement on the avoidance of double taxation. The negotiations started in 2010, but, due to political developments, ratification by the Swiss parliament was delayed. The agreement, applicable from the beginning of 2022, contains some individual features relating to Muslim culture. For example, the taxes covered by the agreement include not only income taxes, but also the zackat. This compulsory levy, which supports the needy, applies to all Saudi Arabian residents with Saudi Arabian passports or to those who belong to a member state of the Gulf Cooperation Council.

Withholding Tax Rates according to DTAs and National Legislation 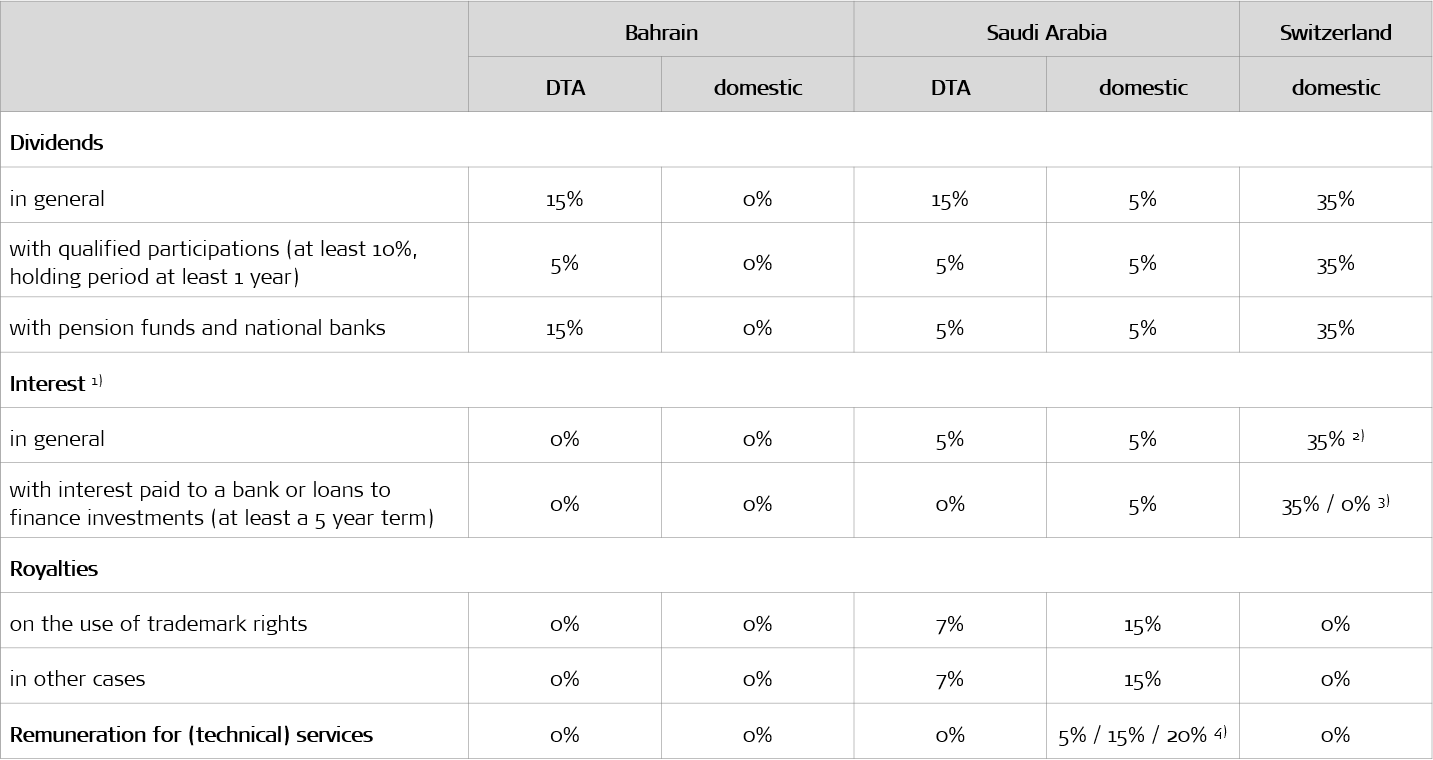