Switzerland has already concluded double taxation agreements (DTA) with over 100 countries. But one agreement, with an important trade and industrial partner and member of the G20 in Latin America, has been lacking until now: with Brazil. In the meantime, the agreement has been concluded and the provisions will apply from 1 January 2022.

OECD-Model Agreement and BEPS Project as Guideline
The agreement with Brazil largely follows the model agreement of the OECD. In addition, important provisions of the OECD and the G20 (BEPS Project) to combat the reducing and shifting of profits have been adopted. For example, the DTA contains an abuse clause which corresponds to the “Principal Purpose Test Rule”. According to this rule, a DTA does not grant any benefits if a transaction or tax construction was undertaken solely in order to obtain these benefits.

The agreement lays down a mutual agreement procedure but lacks an arbitration clause. If Switzerland and Brazil fail to find a mutually satisfactory solution in a dispute, then, in principle, double taxation will remain in place.

Protracted Negotiations with Brazil
The agreement with Brazil, Switzerland’s most important trading partner in Latin America, comes late; the negotiations have dragged on for years. Switzerland had concluded corresponding agreements with other South American countries such as Chile and Ecuador in the 1990s, and with Argentina as early as 1950.

A residual tax rate of 10% remains on dividends within the group. Here, the agreement with Brazil falls short of those with other important trading partners. On the other hand, a most-favored-nation clause, which Switzerland secured for itself unilaterally, deserves positive mention. This means that Switzerland will automatically benefit from lower residual tax rates if Brazil concludes a new DTA with a third country that foresees lower rates

Withholding Tax Rates according to DTAs and National Legislation 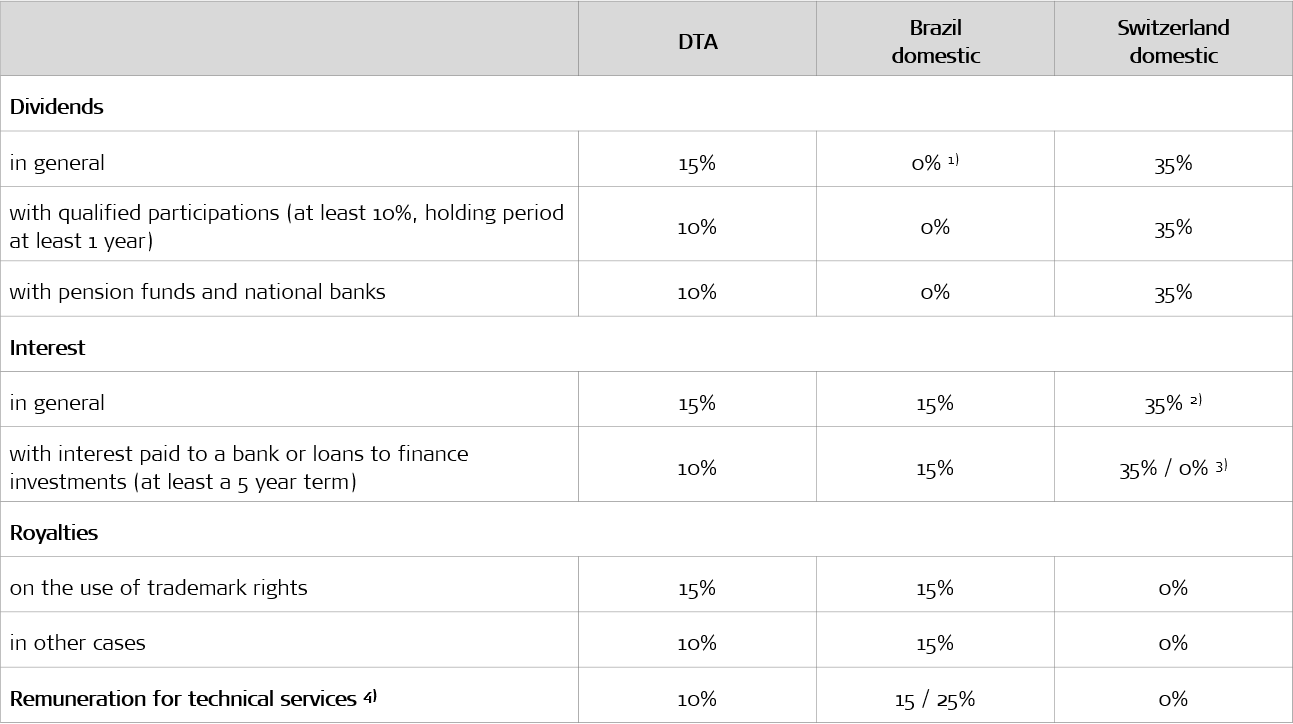